Long considered the safe go-to pain reliever for pregnant women, Tylenol has recently come under fire for its potential risk to unborn babies. Recent research has reported links between prenatal exposure to acetaminophen and later developmental problems in children. Although the American College of Obstetricians and Gynecologists hasn’t changed its stance on the drug’s safety, a study published in the journal PLOS ONE in September labeled the link a “public health concern.”

Found in Tylenol, Midol, Nyquil and other medications, acetaminophen (also called paracetamol) is one of the most commonly used drugs in the world. In fact, it is the active ingredient in more than 600 pain relievers and fever reducers, according to Nature Reviews Endocrinology. Because NSAIDs like ibuprofen are generally not recommended in later pregnancy, acetaminophen is considered one of the only safe pain relievers for pregnant women. In the U.S., as many as 65% of pregnant women may use the drug.

END_OF_DOCUMENT_TOKEN_TO_BE_REPLACED

Zofran, which could be more commonly known by its generic name ondansetron, may potentially cause birth defects in babies when their mothers are on the prescription drug during pregnancy. GlaxoSmithKline, the pharmaceutical company from London, England that manufactures Zofran, insists that their drug does not pose an immediate threat to unborn children. Those who have taken Zofran while pregnant are telling a different story.

A couple from Illinois filed a lawsuit indicating that while the woman was pregnant with their child, she was prescribed Zofran by her doctor as a way to treat nausea and morning sickness symptoms. She claims that the makers of Zofran did not provide any label or indication that would suggest birth defects could be a possible side effect of taking this medication. She believes that if GlaxoSmithKline provided a warning label or any general knowledge that this could transpire, then her son may not have been born with a heart defect that will impact his entire life. Her son had been born with Tetralogy of Fallot, a congenital heart defect that causes oxygen in the blood to reach poor levels—a complication that requires immediate heart surgery at the time of detection and further surgeries in the future. This young boy, who is about nine years old now, suffers from a condition that deeply affects all aspects of his life. The defect puts him at a greater risk for infection, and there’s a possibility that the tissue lining of his ventricular septal could detach and block his arteries. If this were to happen at any point in the future, he would need to be rushed to the hospital within an hour or he could die from this occurrence. All of these issues stemming from the mere fact that his mother received a prescription for medication she should have never been allowed to take in the first place. END_OF_DOCUMENT_TOKEN_TO_BE_REPLACED

According to a state superior court, the parents of a child who sustained serious birth defects because the mother took Topamax while she was pregnant is entitled to $11.6 million from Johnson & Johnson’s Janssen Pharmaceuticals. The ruling strike’s down Janssen’s appeal to an earlier jury verdict.

The child’s mother, Haley Powell, started taking Topamax in 2005 after suffering from an epileptic seizure and losing consciousness. Two years later, doctors weaned her off the drug after finding out she was pregnant.

Ultrasound results showed that the child had a cleft lip. Brayden was also born with gum line defects. He underwent surgery to repair the cleft but he now has a permanent scar extending from his lip to his nose. Brayden also has a speech disability. He may have to undergo gum-graft surgery and rhinoplasty.

END_OF_DOCUMENT_TOKEN_TO_BE_REPLACED

The United States Court of Appeals for the Third Circuit has ordered that a drug defect lawsuit against GlaxoSmithKline LLC over its Paxil antidepressant medication be sent back to a state court. The three-judge panel ruled that the second removal to federal court was not timely. They said that Pennsylvania’s Eastern District Court made a mistake when it denied the plaintiffs motion to remand.

The Paxil birth defect lawsuit was brought by Sallee Miller and her child. They claim that the boy was born with congenital defects because Miller took the SSRI antidepressant while she was expecting. Because of this, she contends, her son was born with a ventricular septal defect and coarctation of the aorta.

Their dangerous drug complaint contends that GSK should have known these risks were involved with its drug but failed to warn about the birth defects. Miller said that she did not know such serious side effects could happen to her child from taking the medication.

END_OF_DOCUMENT_TOKEN_TO_BE_REPLACED

A jury says that Janssen Pharmaceuticals, a Johnson & Johnson unit, must pay $3 million for not warning a woman that using Topamax during pregnancy could cause birth defects. The plaintiffs contend that 5-year-old Payton Anderson was born with a cleft lip because her mother was prescribed the drug for migraines during the first trimester of pregnancy. Already, she has had several operations and will need more surgeries as she grows older.

Janssen disagrees with the Topamax injury verdict. A spokesperson for the pharmaceutical company said that Mrs. Anderson was cautions by four physicians about the risks involved when taking Topamax. Janssen maintains that it has always warned about the possible side effects that could affect pregnant women.

END_OF_DOCUMENT_TOKEN_TO_BE_REPLACED

A half-century after women who were pregnant took Thalidomide to ease their symptoms gave birth to children with severe defects, over 100 victims in New Zealand and Australia have won their class action dangerous drug litigation against distributor Diageo. They will receive an US$81 million settlement.

The drug’s maker Grünenthal was not involved in this latest settlement. (Reuters says that as of 2010 the manufacturer had already paid $680 .77 million in drug injury compensation over Thalidomide. In 2012, Grünenthal apologized to Thalidomide victims.)

According to a study found in the journal Toxicological Sciences, up to 10,000 people in Japan, Europe, and Australia were victims of Thalidomide-more, if you count those in other countries. The drug was promoted as a morning sickness medication. Thousands of babies whose moms took Thalidomide while pregnant were born with serious defects.

END_OF_DOCUMENT_TOKEN_TO_BE_REPLACED

According to a new study just published online in the journal Obstetrics & Gynecology, women who took Percocet, Oxycontin, or Vicodin during their early stages of pregnancy are two times as likely to deliver babies with serious neural tube defects, including spina bifida. However, researchers qualified this doubled risk as “modest” and occurring in just almost six out of every 10,000 live births. Still, not even one baby should be born with a birth defect because his/her mom took medication while pregnant.

Prescription painkillers are the number to choice of drug when it comes to drug abuse-marijuana being the first-and some 22 million Americans have misused prescription pain meds in the last decade. That’s a lot people using painkillers-and if this use can lead to birth defects in babies, consumers should know.

The U.S. Centers for Disease Control and Prevention funded the study, which was authored by Slone Epidemiology Center postdoctoral associate Mahsa Yazdy, who is at Boston University. The study looked at data from phone interview with new mothers during a 12-year span. Moms of more than 305 children who were born with neural tube defects were compared to the moms of over 20,000 infants belonging to two groups: one of babies with other birth defects not linked to opioid use and the other of ‘healthy” babies.

END_OF_DOCUMENT_TOKEN_TO_BE_REPLACED

While the use of antidepressants during pregnancy is not a new topic, it continues to be a growing concern for mothers all over the world. Though the U.S. Food and Drug Administration does not entirely discourage women from using antidepressants, it has issued a warning that use of certain SSRI’s (selective serotonin rebuke inhibitor) during pregnancy carry a risk of causing serious birth defects.

SSRI (selective serotonin rebuke inhibitor) antidepressants such as Prozac, Paxil, Zoloft, Celexa, and Lexapro are commonly prescribed medications used in the treatment of depression. While it is often safe for women to take these medications during their pregnancy, there still lies a risk for the baby. A study done by a Danish research group in 2005 found a significant risk of heart malformation in children born to women who took antidepressants. The study showed that babies born to mothers who had filled prescriptions for more than one SSRI medication had a fourfold increased risk for developing septal heart defects (malformation of the wall that divides the left and right sides of the heart).

Common SSRI antidepressants that fall under Category C include: Zoloft, Celexa, Lexapro, Prozac, however another SSRI, Paxil is classified as a Category D medication. 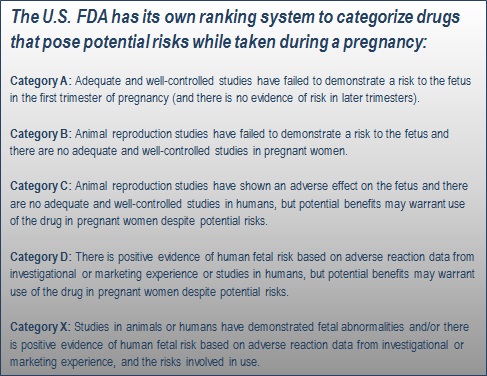